We are so used to infrared remote controls that we don’t give time over to think about them. They are nowadays familiar to us, although they would have seemed magic to our grandparents.

Today it seems normal that electronic equipment, televisions, stereos, air conditioners, respond to our instructions without having to get up from the sofa, but this has not always been the case, moreover, these kind of controls have become popular not so long ago.
We have heard that they operate by using infrared rays and not much more. I wonder how many people would answer correctly to what infrared rays are and which principle of operation is behind a remote control.

To focus some ideas, let’s start by saying that the electromagnetic waves are characterized mainly by their frequency or what is the same, the inverse of this, that is, the wavelength.

They are similar to sound waves. Those that have a lower frequency are called infrasounds, and after them come the sound waves, of course. A little above we find the ultrasounds (surprising names, which basically means below and above what you hear).

In the electromagnetic spectrum, we find first radio waves and microwaves. Then as you see in this image, we can see the infrared zone (below red), the spectrum of visible light with the familiar colours (which are just one way our brain perceives the light frequencies) and then the ultraviolet (above violet).

Further up the scale we find the X-ray (when the German scientist Roentgen discovered this kind of radiation in the late nineteenth, he had no idea of what it was, so it seemed a good idea to call them X-rays, or unknown, and we still continue with this joke) and finally the gamma or cosmic rays.

The amount of radiation energy increases rapidly with frequency, that is why X-rays and gamma rays are very harmful to living beings.

One way to describe the infrared rays would be a light with a different wavelength, that we are not able not see, but nevertheless light.

A little-known curiosity is that the camera of your mobile phone or tablet is able to see and show the IR radiation of your remote controls.

Infrared light is suitable for remote controls because:

So it is practical, simple and cheap (what the manufacturers like), but it also has drawbacks.

The main drawback is that anything with a certain temperature, including us, emits infrared radiation. That is why IR cameras can show people or animals clearly in the dark (as you can see in action or war movies).

And this could interfere with the IR remote control, as well as things like heating, sun and other hot items. So the solution to avoid this is to modulate the signal with a carrier.

The basic idea is to send a train of stable waves (the carrier) and mix it with the information you want to send (the signal). This same principle is used with radio and almost any radio signal that is sent through the air.

We have found this gif image in the subprojects site and I think it is ideal to show the process of modulation and transmission.

The emitter is a simple transistor that controls an infrared LED diode, very similar to the normal LEDs diodes we have used so far, but this time designed to emit light in a colour that we are not able to see.

A simple processor in the remote control takes care of the signal generation and mixing with the carrier to ensure that our TV does not receive spurious commands.

The receiver is a little more complex because the IR emission standards for remote controls, appeared like mushrooms after a storm and each manufacturer presented its own standard.

At the end the industry ended up designing receivers capable of receiving and demodulating almost anything, and as they are sold like cupcakes (because we love to keep our ass glued to the sofa) they are so cheap, besides a technological marvel.

A current typical IR receiver includes the receiver, amplifier-demodulator and ready for use. You can not imagine the amount of electronics that is included in this innocent looking little piece.

A typical IR receiver, is the AX-1838HS, which costs a few euros and is relatively easy to find in two ways: stand alone and mounted in a breakout board (to be easily connected to our Duinos). In its data sheet you can find this diagram:

The wiring diagram is again trivial, as the AX-1838HS only has 3 pins: Vcc, GND and signal. As we will use an interrupt to read the signal is essential to connect the signal pin to the Arduino pin 2 (Interruption 0) or pin 3 (Interruption 1).

We are going to connect it to pin 2, as can be seen in the code and examples.

So that they can be used in a comfortable way, we will download a library that will make our life easier. Of the several available we liked the one from Hood Nico, for several reasons.

First we have to download the IRLremote.zip library, and then install it following the usual procedure we saw in previous chapters.

Once done, we must import the library:

And then we initialize it:

Let’s start with an example that the author recommends in order to recognize the remote control we use. You can load the following example IRLremote \ ReceiveInterrupt:

This program simply tries to read your remote control and send that information to the console. Make sure you set the baud rate at 115200: 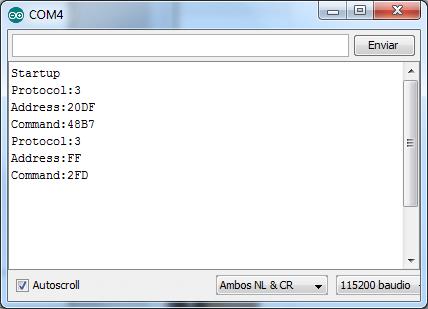 As you see the interruption service routine simply shows the values of the protocol that the library kindly he acknowledges on the fly. These values are:

We have tried 5 different IR remote controls (we have many junk) and 4 were recognized correctly at first: Panasonic, Sony, LG and Keyes.

The one that was not recognized was an old remote control from a Schneider TV that we didn’t know where it came from.

And in this sketch is already implicit everything you need to use an IR remote control in your projects. The rest of the chapter is simply an example of how to manage these keystrokes with a switch statement, that is a C++ statement that we had not ever used.

We will assemble a prototype with Arduino and 4 coloured LED diodes to turn them one at a time or all at once, using the IR remote control.

The schematic is quite simple:

And the wiring diagram is harder to draw than to assemble:

At the beginning of this chapter we saw that we received instructions from the remote control (I hope so) and on the console was shown the value of the protocol, its address and which command corresponded to the button pressed. These commands are what you need for your sketch to start working.

First you have to run the previous sketch to record the codes that correspond to each key of your remote control, and write a table. You don’t have to write all keys for now, but at least those that we are going to use.

The results from the LG remote control were the following:

And using these values we can write the control program. We will use the switch-case statement, which is very comfortable when you have to check many values and take some action in response to a variable. The basic idea is like this:

The switch statement analyzes the variable whose value determines what action to take, in this case which button was pressed. And then a case clause is set for each possible value. Note that all case clauses end with a colon. Then come the statements to be executed and the cause clause ends with a break statement. The break statement ends the switch-case statement and prevents the execution of other case clauses.

We have written on purpose a Serial.println() so you can see that you can write several statements without using a block of code, because it is already implicit in the case.

You can include a default clause at the end, just in case you want an action to be executed if the value of the variable does not match any other case specified above.

Here you have a example sketch:

The only new thing up here, has been to define as output the pins from 8 to 11:

The switch clause is very useful to avoid nested if-else statements that make you lose the thread. Imagine that you have to check all the possible keys of a remote control.

Finally and before finishing, we should comment that the author of the library recommended that if we are to use a single command, we must replace the following line:

by one that matches our model because this way we will save memory and speed in decoding the signals. In our case, as the protocol is 3, IR_NEC, we would use: