So far we have ever used fixed resistors that have resistance values that are essentially constant. But sometimes it is useful to have a variable signal to control our circuit. Think of the control to adjust the volume of an stereo or of the dial that tunes a radio station.

A potentiometer is simply a device that provides a variable resistance, by turning its shaft.

There are potentiometers in so many sizes, shapes and colours as you can imagine, but at the end they are nothing but a fixed resistor (10 kΩ in our case) and a mechanism to allow the wiper (the sliding contact) to move over the resistive material when the shaft is rotated, so we can read a portion of that value.

That’s why a potentiometer provides always three terminals in a row. The two outermost terminals behave as a fixed resistor, that has the same resistance value as the full scale of the potentiometer (10 KΩ in our case), and the central terminal changes the resistance depending on the rotation of the shaft.

We are going to assemble a protoype using the following circuit schematic diagram. Here the potentiometer is labelled Pot1. 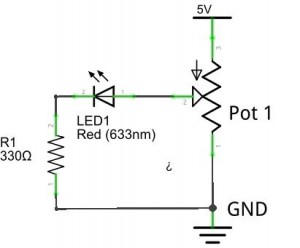 The idea is to connect +5V and GND to the outermost terminals of the potentiometer (it doesn’t matter to which of them because resistors have no voltage polarity), and then the central terminal to the positive terminal of a LED diode. The negative terminal of the LED diode is wired to ground via a limiter resistor.

This way, when we rotate the shaft of the potentiometer we modify the voltage applied to the input of the LED diode, that will take values from 0 to +5V (although it seems to be strange is very easy), and so we will have a current intensity regulator for the LED diode.

The assembly in the breadboard will be similar to this. We use Arduino just to power the circuit. You will see that the intensity of the light in the LED diode varies continuously by rotating the shaft of the potentiometer.

We can use Arduino to interact with the outside world applying HIGH/LOW signals in the digital pins and using PWM we can quite successfully simulate analog signals in some of these pins as well.

We have also seen how to detect whether a button is pressed, defining as inputs the digital pins. But often the sensors we use to watch over the outside world provide us an analog signal. This applies to sensors of temperature, distance, pressure, PH, current intensity in a circuit or water flow in a pipe.

To read this type of continuous signals we need a analog to digital converter (ADC) because they allow us to read the value of an analog signal at a given moment.

These converters takes a sample of the current value and return its instantaneous value, measured in volts. By repeated reading of samples over time we can rebuild the original signal more or less accurately, depending on the accuracy of our measure and the speed at which you can take those samples.

Arduino UNO provides six analog to digital converters, from A0 to A5, labelled as ANALOG IN.

Let’s see how to use the analog input using the following wiring diagram. The ends of the potentiometer are wired to ground and +5V, respectively, and the central pin (the variable) is wired to the Arduino analogical pin A5.

The first thing to note is that we don’t need to declare inside the setup() function that we are going to use an analog port. And the second thing is that in order to take an analog sample from the pin A5, we will use the analogRead() function:

Let’s write a program that reads the value from the pin A5 and send it to the serial port in order to be watched in the console.

Try out this program!:

After uploading the program, open the serial monitor and you will see how the readings vary in a continuous way as you turn the shaft, indicating the position of the wiper. The readings show the voltage drop in volts across the potentiometer.

I can’t help suggesting you this test: Unplug the potentiometer from the pin A5 and watch the results that Arduino sends to the serial monitor console. Where does these values come from?

We already said that the Arduino family provides analog to digital converters with 10 bits of resolution (210 = 1.024), 12 bits (212 = 4.096) in the case of the Arduino DUE. But up to now we have not seen at which rate we can take samples with our Arduino. Let’s try it out with this same circuit.

C++ provides the millis() function that returns the elapsed time since we power up Arduino and we can use it to check how many samples per second we can take.

If you run this program in Arduino UNO it will take, more or less, 8.940 samples or readings per second. It is not that bad.

It is suitable for sampling signals that do not vary too quickly over time, as are almost all the usual sensors in the industry, but it will fall short if you want to sample audio signals.